I added a flexible passive GPS antenna to one of my PinePhones. These antennas are meant to be adhered directly to the inside of a plastic enclosure, far from any metal or ground planes. The datasheets I have read for similar antenna recommend at least 12mm distance to the ground plane. This particular antenna I got off of eBay from China, and has no datasheet. It does work quite well though. 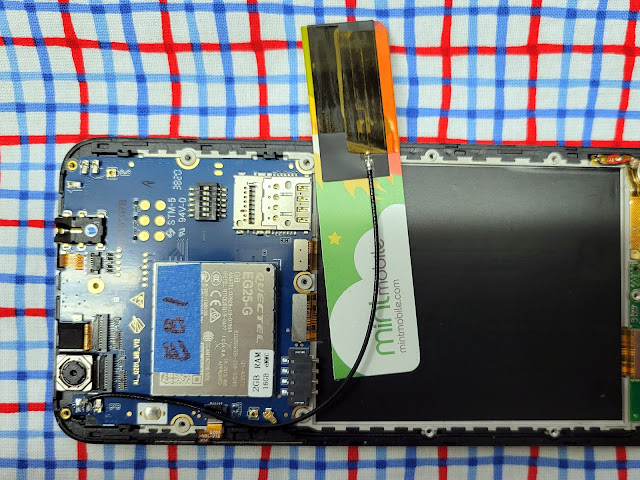 I taped the antenna to a piece of plastic from a SIM card to make it more rigid. It is paper thin, except for the area where the cable is soldered. 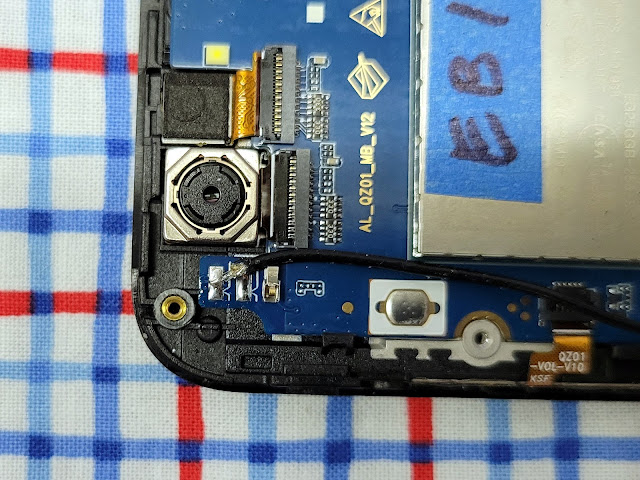 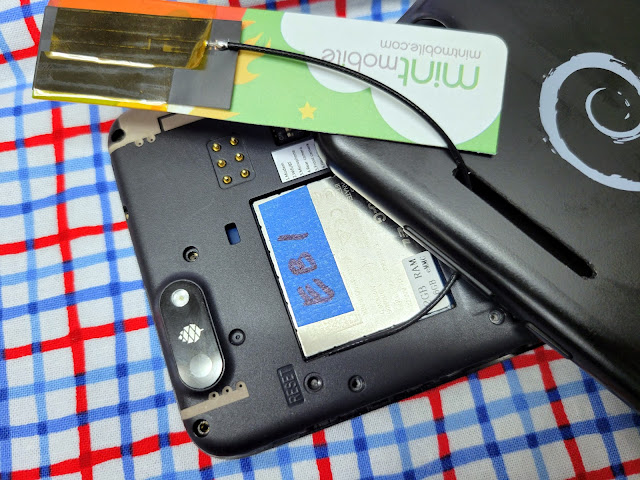 I shaved some of the plastic from the mid-frame so that the cable would fit between it and the metal shield of the modem. I also cut a slot in the back case with a Dremel cut off wheel. 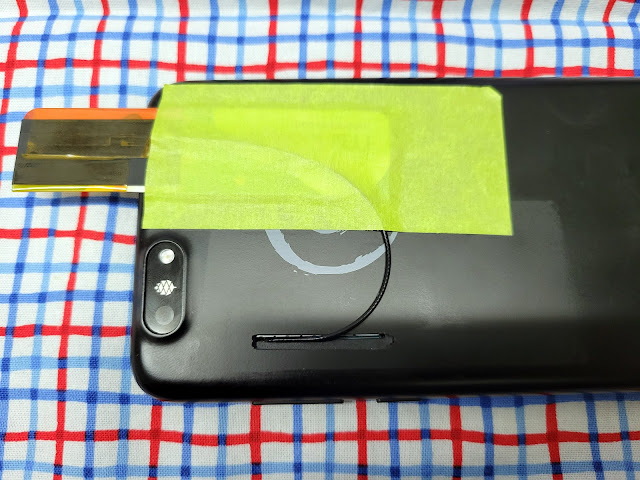 The antenna mounted like this, sticking out the top, gives the best reception. I tried several locations on the back, but they gave a much weaker signal, though still much better than the stock antenna.

Example cgps output from 3 different PinePhones. Left is the Franken-Phone with the 15mm Adafruit passive ceramic patch antenna. The middle is the flexible passive antenna from eBay. Right is a stock PinePhone. All three were sitting next to each other on a table, in a room with a concrete ceiling.

The flexible antenna gives the best performance, the stock never gets a lock.

I have a few more antennas coming. One is designed to be placed directly on a metal surface. Hopefully one will work well enough not to have to have it stick out the top of the phone. Also, the fingerprint reader/wireless charging back looks like it might work well with an antenna. It's thicker and has more space inside to hide the cable.

By default the GNSS settings on the Quectel EG25-G are set to receive signals from GPS, GLONASS, BeiDou and Galileo. Even if it is not outputting NMEA for the specific GNSS it is still using it to calculate position. Section 2.1.8 of the Quectel Manual covers the GNSS selection.

I tried enabling NMEA output for all the GNSS simultaneously but the gpsd clients don't know how to parse the multiple output sentences. I could see in the raw NMEA output lists of satellites for both GPS and GLONASS, but the clients would only list GPS or GLONASS, somewhat randomly. I ended up leaving only GPS NMEA output on.

In the AGPS proof of concept script you should change xtra.bin to xtra2.bin. xtra2.bin includes GLONASS data as well as GPS. This is explained in section 1.3 of the Quectel Manual. Should also set the time before uploading data according to section 2.8.

Popular posts from this blog

April 22, 2021
I decided to take the worst performing PinePhone PCB and turn it into a hardware test bed. This is the 3GB 1.2b upgrade board that fails my compiler and memtester tests . It will time jump even with the RAM running at 492MHz. It is usable. With the serial adapter you can login to the serial console without an attached screen. Once WiFi/SSH is configured you can do everything remotely. I have also used wayvnc to remotely connect to the graphical desktop. I bought a large flat aluminum heatsink from Amazon to use as a base. I cut up a sheet of thermal pad material (sold for use with 3d printer glass hot beds). The pad is sticky and holds the PCB and battery to the heatsink. The battery is not the correct type/size for a PinePhone battery. It is an old battery I found in a drawer that has the same pinout, works fine. The micro USB breakout board has the VBUS and Ground soldered directly to the pogo pin pads. The loose orange wire at the bottom is soldered to a tiny pad next to the ke
Read more

My PinePhone board tests

April 21, 2021
I have several PinePhones, from the first BraveHeart release to the last Mobian Community Edition . I also upgraded the BH and Ubports 2GB boards to the 1.2b 3GB version. A total of 9 PCB's.  After experiencing the time jump problem I tested all the boards for stability. There are two tests, compiling and memtester. The first is compiling a project repeatedly for 24 hours. An endless loop of make && make clean. The second test is memtester. I ran it for 20 passes for either 1.6GB or 2.6GB.       sudo memtester 1600m 20 I have a dedicated microSD card for each test. The compiler test is running Manjaro Phosh . memtester is running Arch Linux ARM barebones, which leaves more RAM available for testing. Both Manjaro Phosh and Arch Linux ARM come with multiple u-boot bootloaders that let you change the RAM interface speed. I tested at the highest 624MHz and worked down to slower speeds if there were errors. The results: 3 of the boards time travel. This seems to be a side ef
Read more